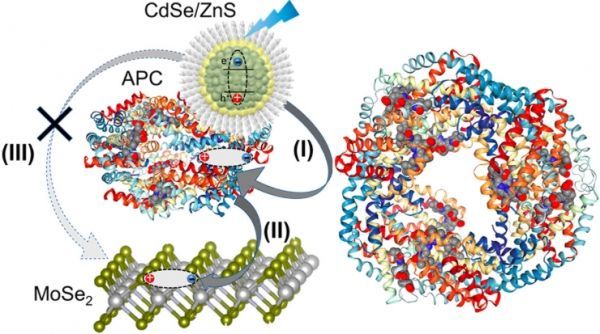 To absorb incoming sunlight, plants and certain kinds of bacteria rely on a light-harvesting protein complex containing molecules called chromophores. This complex funnels solar energy to the photosynthetic reaction center, where it is converted into chemical energy for metabolic processes.

Inspired by this found-in-nature architecture, scientists from the U.S. Department of Energy’s (DOE) Brookhaven National Laboratory and Stony Brook University (SBU) have assembled a nanohybrid structure that contains both biologically derived (biotic) and inorganic (abiotic) materials. They combined a light-harvesting protein from a cyanobacteria, semiconducting nanocrystals (quantum dots), and a two-dimensional (2-D) semiconducting transition metal only one atomic layer thick. Described in a paper published on April 29 in ACS Photonics—a journal of the American Chemical Society (ACS)—this nanostructure could be used to improve the efficiency with which solar cells harvest energy from the sun.

“Today’s best solar panels can convert nearly 23 percent of the sunlight they absorb into electricity, but on average, their efficiency ranges between 15 and 18 percent,” said corresponding author Mircea Cotlet, a materials scientist in the Soft and Bio Nanomaterials Group at Brookhaven Lab’s Center for Functional Nanomaterials (CFN)—a DOE Office of Science User Facility. “If this efficiency can be boosted, more electricity can be generated. The assembled biotic-abiotic nanohybrid shows enhanced harvesting of light and generation of electrical charge carriers compared to the 2-D semiconductor-only structure. These properties increase the nanohybrid’s response to light when the structure is incorporated into a field-effect transistor (FET), a kind of optoelectronic device.”

Image: As depicted in the illustration above, the hybrid nanostructure contains molybdenum diselenide (MoSe2) as the base, core-shell cadmium selenide (CdSe)–zinc sulfide (ZnS) quantum dots (QDs) on the outer side, and the allophycocyanin (APC) protein sandwiched between the QDs and MoSe2. When the system is excited with light (blue lightning strike symbol), energy is transferred in a stepwise manner through the different components, as indicated by the gray arrows. A top view of the APC protein structure is shown on the right.  CREDIT: American Chemical Society