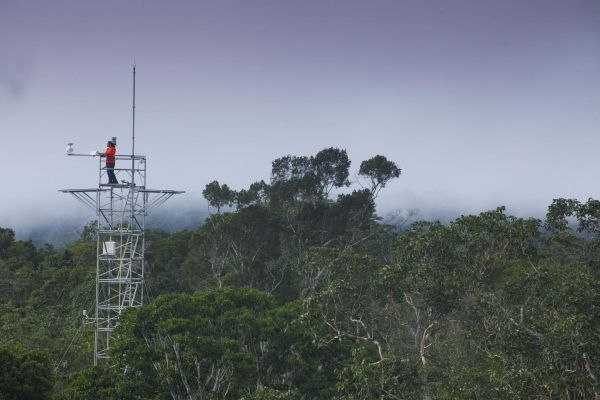 Trees are seen as saviors in an era of climate change.

Trees are seen as saviors in an era of climate change. Via their leaves, they absorb carbon dioxide and transform the greenhouse gas into oxygen and biomass. According to estimates by the International Panel on Climate Change (IPCC), the Amazon rainforests absorb a quarter of the carbon dioxide that is released each year from the combustion of fossil fuels. To date, global climate models have assumed that this absorption capacity will also remain constant in the future.

"But there has been no proof of this to date", emphasizes Dr. Katrin Fleischer. "It is entirely possible that the absorption capacity will even decrease." The ecologist from the Professorship for Land Surface-Atmosphere Interactions at the Technical University of Munich worked together with ecologists and ecosystem modelers from 10 countries to investigate the extent to which the nutrient supply in the Amazon region limits the production of biomass.

In doing so, the team did pioneering scientific work: To date, nobody has investigated this connection in depth, says Fleischer: "Most ecosystem models which allow the future development of ecosystems to be simulated were developed for the temperate latitudes, where there is generally sufficient phosphorus. However, in many areas of the Amazon region, it is in short supply – the ecosystem is many million years old, and the soil is leached of nutrients."

Image: Measuring tower of the AmazonFACE project in the Brazilian rainforest. (Credit: AmazonFACE)