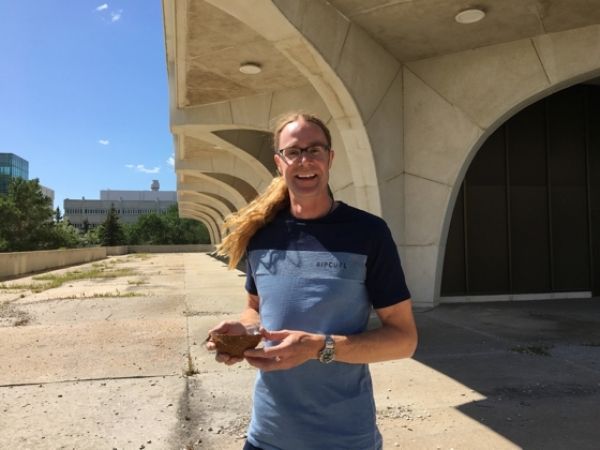 When Stephen King was growing up in North Portal, Saskatchewan, barn swallows were a common sight.

When Stephen King was growing up in North Portal, Saskatchewan, barn swallows were a common sight. Throughout the spring and summer, they could be seen flying around barns and other outbuildings, on neighbouring farms, and in and around the village. There was even a pair that used to nest every year on the light fixture above the front door of the family home.

“They can be rather messy, but my parents were okay with that and I spent a great deal of time watching the barn swallows fly around our yard because they are very graceful in flight,” says King, senior researcher to University of Regina President and Vice-Chancellor Dr. Vianne Timmons. “They would dive-bomb pretty much everyone else who got near the nest, including our dogs, but they got used to my presence and grudgingly tolerated me.”

King remembers seeing barn swallows on campus when he was an English student at the University some 30 years ago but admits he didn’t pay much attention to them at the time. That started to change when he became a staff member at the University 12 years ago.

“Over the past dozen years or so, I have taken more notice of them since I spend many of my lunch breaks walking on the Dr. John Archer Library podium with my wife Cara, who works in the library.”

Continue reading at University of Regina.

Image via University of Regina.