Details
The University of Kansas 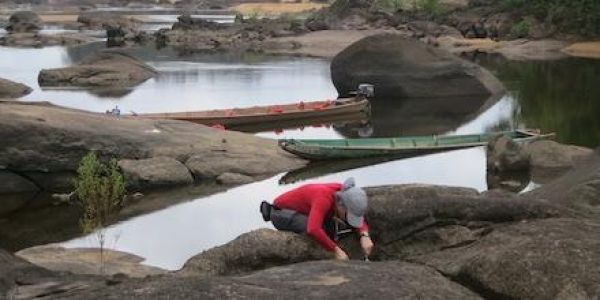 Researchers from the University of Kansas have described three genera and 17 new species of water scavenger beetles from the Guiana and Brazilian Shield regions of South America.

Researchers from the University of Kansas have described three genera and 17 new species of water scavenger beetles from the Guiana and Brazilian Shield regions of South America, areas seen as treasure houses of biodiversity. The beetles from the countries of French Guiana, Suriname, Brazil, Guyana and Venezuela were discovered through fieldwork and by combing through entomological collections at the Smithsonian Institution and KU.

The beetles are described in a new paper in ZooKeys, a peer-reviewed journal.

Lead author Jennifer Girón, a KU doctoral student in ecology & evolutionary biology and the Division of Entomology at KU’s Biodiversity Institute, said the new species hint at vast biodiversity left to be described in regions where resource-extraction operations today are destroying huge swaths of natural habitat.

“The regions we've been working on, like Venezuela and Brazil, are being degraded by logging and mining,” she said. “Eventually, they’re going to be destroyed, and whatever lives there is not going to be able to survive. At this point, we don't even know what’s there — there are so many different kinds of habitats and so many different resources. The more we go there, and the more we keep finding new species, the more we realize that we know next to nothing about what’s there.”

Read more at: The University of Kansas