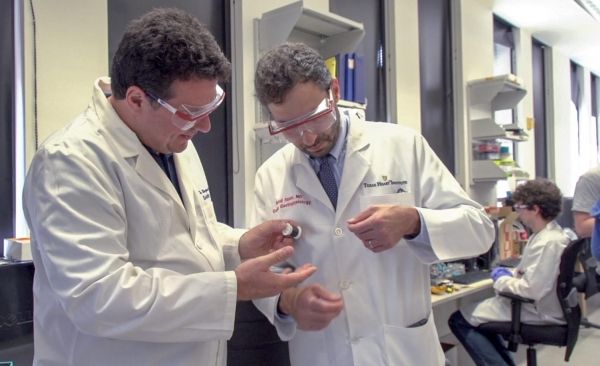 Scientists at Texas Heart Institute (THI) report they have used biocompatible fibers invented at Rice University in studies that showed sewing them directly into damaged tissue can restore electrical function to hearts.

“Instead of shocking and defibrillating, we are actually correcting diseased conduction of the largest major pumping chamber of the heart by creating a bridge to bypass and conduct over a scarred area of a damaged heart,” said Dr. Mehdi Razavi, a cardiologist and director of Electrophysiology Clinical Research and Innovations at THI, who co-led the study with Rice chemical and biomolecular engineer Matteo Pasquali.

“Today there is no technology that treats the underlying cause of the No. 1 cause of sudden death, ventricular arrhythmias,” Razavi said. “These arrhythmias are caused by the disorganized firing of impulses from the heart’s lower chambers and are challenging to treat in patients after a heart attack or with scarred heart tissue due to such other conditions as congestive heart failure or dilated cardiomyopathy.”

Rice University Professor Matteo Pasquali, left, and Dr. Mehdi Razavi of the Texas Heart Institute check a thread of carbon nanotube fiber invented in Pasquali's Rice lab. They are collaborating on a method to use the fibers as electrical bridges to restore conductivity to damaged hearts. (Photo Credit: Texas Heart Institute)