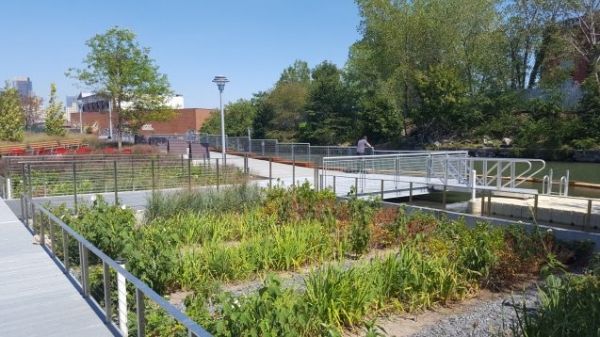 Researchers find that large green spaces like parks and wetlands help maintain groundwater levels and support habitats among other benefits.

Around 72 percent of New York City’s land is covered in an impervious layer of concrete, living up to its hype as the “concrete jungle” that Alicia Keys and Jay-Z sang about in “Empire State of Mind.” This city might be “where dreams are made,” but unfortunately a lot of sewage and pollution are made here, too. And thanks to all of these impermeable surfaces, heavy rains often wash untreated sewage and urban run-off into nearby rivers.

In an effort to reduce environmental and health problems related to stormwater runoff, in 2011, the New York City Department of Environmental Protection planned on spending $1.5 billion to turn 8,000 acres of ‘concrete jungle’ into green spaces. These measures could include creating curbside gardens or bioswales, expanding green roofs, and planting street trees. But how do urban planners decide which of these types of green infrastructure is best for a project or community?

Scientists know that green infrastructure like parks and wetlands help to retain water in the soil and filter out pollutants from run-off. However, while reviewing the existing literature, a team of researchers at Columbia University observed that the added benefits of green infrastructure have not been as thoroughly studied. The team made an effort to fill this gap by delving deeper into the social, cultural, and environmental services of 14 kinds of green infrastructure, using New York City as a case study. The research was published last week in the journal Ambio.