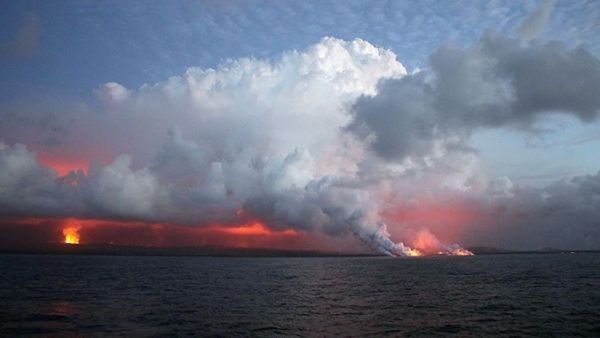 When Kīlauea Volcano erupted in 2018, it injected millions of cubic feet of molten lava into the nutrient-poor waters off the Big Island of Hawai‘i. The lava-impacted seawater contained high concentrations of nutrients that stimulated phytoplankton growth, resulting in an extensive plume of microbes that was detectable by satellite.

A study led by researchers at the University of Hawai‘i (UH) at Mānoa and University of Southern California (USC) and published today in the journal Science revealed that this biological response hinged on unexpectedly high concentrations of nitrate, despite the negligible amount of nitrogen in basaltic lava. The research team determined that nitrate was brought to the surface ocean when heat from the substantial input of lava into the ocean warmed nutrient-rich deep waters and caused them to rise up, supplying the sunlit layer with nutrients.

After observing the phytoplankton bloom in satellite images, the UH Mānoa Center for Microbial Oceanography: Research and Education (C-MORE) organized a rapid response oceanographic expedition on UH research vessel Ka‘imikai-O-Kanaloa from July 13 to 17, 2018—in the thick of Kilauea’s activity. The team conducted round-the-clock operations in the vicinity of the lava entry region to test water chemistry and the biological response to the dramatic event.

Co-lead authors Sam Wilson at C-MORE and Nick Hawco, a USC researcher who will be joining the UH Mānoa Oceanography Department in January 2020, tested the hypothesis that lava and volcanic dust would stimulate microorganisms that are limited by phosphate or iron, which are chemicals found in lava.