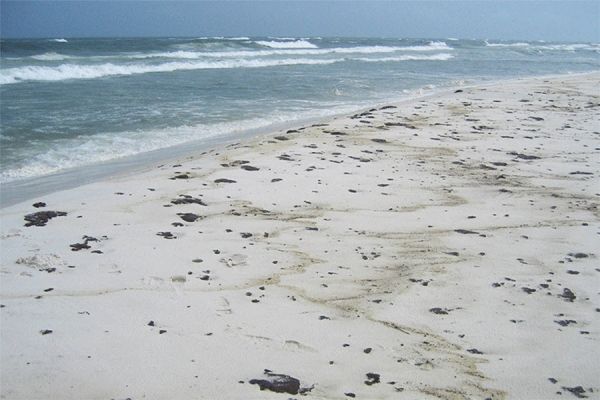 Golf ball-size clods of weathered crude oil originating from the 2010 Deepwater Horizon catastrophe could remain buried in sandy Gulf Coast beaches for decades, according to a new study by ecologists at Florida State University.

In a paper published in the journal Scientific Reports, FSU Professor of Oceanography Markus Huettel and graduate student Ioana Bociu revealed that these large clumps of oil and sand — called sediment-oil-agglomerates — take at least 30 years to decompose.

“This oil contains substances that are harmful to the environment and to humans,” Huettel said. “Understanding the fate of this buried oil is critical, as it can persist for long periods of time.”

Oil from the Deepwater Horizon spill contaminated an estimated 965 kilometers of sandy beaches along the Gulf of Mexico coastline. Portions of that oil were quickly removed: Past research conducted by Huettel his colleague Joel Kostka from the Georgia Institute of Technology found that smaller Deepwater Horizon-derived oil droplets were degraded by sand-dwelling microbes, or pervasive microscopic organisms, within just one year of washing ashore.

In addition to the rapid degradation of smaller droplets, significant amounts of larger oil particles were extracted by sweeping mechanical excavation efforts. But these muscular cleanup operations were not able to unearth all of the harmful oil, some of which was buried as deep as 70 centimeters in the sand.