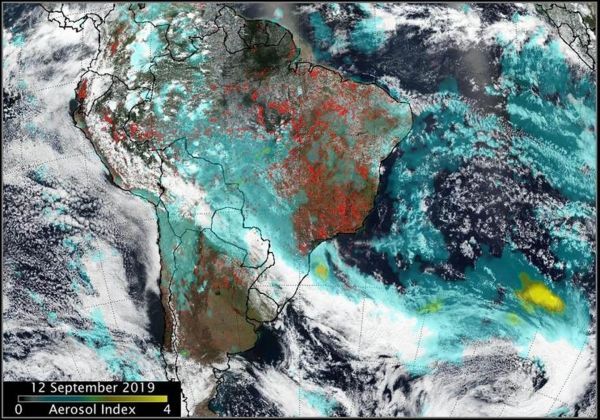 Wherever fires are burning around the world NASA-NOAA’s Suomi NPP satellite’s Ozone Mapping and Profiler Suite (OMPS) can track the smoke and aerosols.

Wherever fires are burning around the world NASA-NOAA’s Suomi NPP satellite’s Ozone Mapping and Profiler Suite (OMPS) can track the smoke and aerosols. On Sept. 13, 2019, data from OMPS revealed aerosols and smoke from fires over both South America and North America.

Suomi’s OMPS tracks the health of the ozone layer and measures the concentration of ozone in the Earth's atmosphere and can detect aerosols. Ozone is an important molecule in the atmosphere because it partially blocks harmful ultra-violet radiation from the sun. OMPS data help scientists monitor the health of this vital protective layer.

OMPS also can be used to measure concentrations of atmospheric aerosols from dust storms and similar events as well as sulfur dioxide (SO2) from volcanic eruptions. One aerosol-related OMPS product is a value known as the “aerosol index,” or AI. The AI value is related to both the thickness and height of the atmospheric aerosol layer. For most atmospheric events involving aerosols, the AI ranges from 0.0 to 5.0, with 5.0 indicating heavy concentrations of aerosols that could reduce visibilities and/or impact health.

Fires in South America generated smoke that continues to create a long plume east into the Atlantic Ocean. Fires over western Brazil were generating aerosols at a level 2.0 on the index. Higher aerosol concentrations, as high as 4.0 were seen off the southeastern coast of Brazil as a result of the fires in the region. (Photo Credit: NASA/NOAA, Colin Seftor)