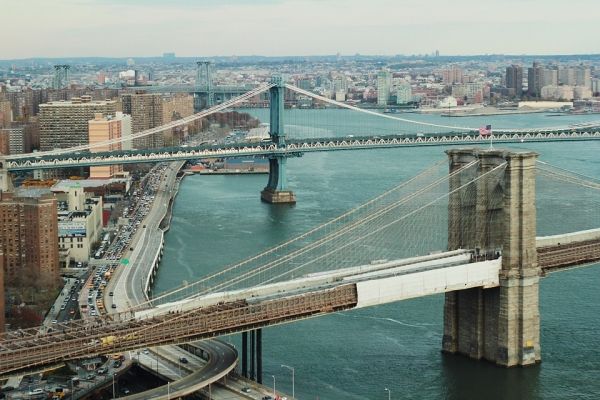 On a sunny afternoon, John Lipscomb steered the 22-foot vessel Ian Fletcher past the rip-rapped, industrialized shoreline of South Brooklyn and into the vastness of New York Harbor, where the Hudson River meets the sea.

On a sunny afternoon, John Lipscomb steered the 22-foot vessel Ian Fletcher past the rip-rapped, industrialized shoreline of South Brooklyn and into the vastness of New York Harbor, where the Hudson River meets the sea. The towers of Lower Manhattan glittered to the north, and the Statue of Liberty rose off our bow. Lipscomb — vice president for advocacy for Riverkeeper, a non-profit — let off the throttle, and we paused to take in both the incongruities and the splendors of the scene. Then our thoughts turned to the river.

Not two months earlier, Lipscomb told me, American Rivers had named the Hudson the second most endangered waterway in the nation. It wasn’t pollution that put the river on the conservation group’s 2019 watchlist, though parts of it are, in fact, polluted. Nor was the river particularly imperiled by diversions or urban sprawl, like others on the list. For the first time in its history, American Rivers had singled out a waterway solely on the possibility that massive in-river storm surge barriers could rise in its lower reaches, representing an existential threat to a river in the midst of much-heralded ecological recovery.

Plans to build barriers in New York Harbor were set in motion by Superstorm Sandy, which in 2012 barreled up the East Coast, killing 72 people in the Mid-Atlantic and Northeast and causing $65 billion in damage. To protect the metro area’s people and property from future Sandys, the U.S. Army Corps of Engineers has devised five possible schemes for erecting walls to hold back the sea during future catastrophic storms. But environmental advocates say such storm surge barriers will do nothing to shield against expected sea level rise from climate change and — judging by the impact of barriers elsewhere — may even destroy the ecological integrity of harbors they’re meant to protect.