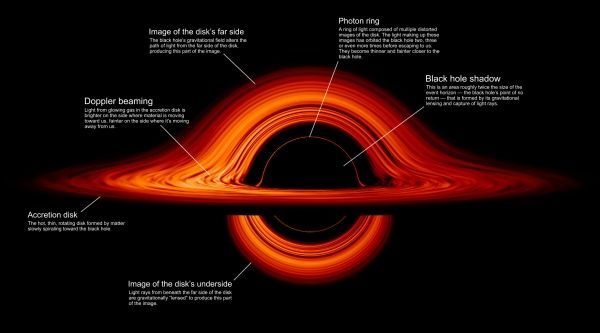 This new visualization of a black hole illustrates how its gravity distorts our view, warping its surroundings as if seen in a carnival mirror.

This new visualization of a black hole illustrates how its gravity distorts our view, warping its surroundings as if seen in a carnival mirror. The visualization simulates the appearance of a black hole where infalling matter has collected into a thin, hot structure called an accretion disk. The black hole’s extreme gravity skews light emitted by different regions of the disk, producing the misshapen appearance.

Bright knots constantly form and dissipate in the disk as magnetic fields wind and twist through the churning gas. Nearest the black hole, the gas orbits at close to the speed of light, while the outer portions spin a bit more slowly. This difference stretches and shears the bright knots, producing light and dark lanes in the disk.

Viewed from the side, the disk looks brighter on the left than it does on the right. Glowing gas on the left side of the disk moves toward us so fast that the effects of Einstein’s relativity give it a boost in brightness; the opposite happens on the right side, where gas moving away us becomes slightly dimmer. This asymmetry disappears when we see the disk exactly face on because, from that perspective, none of the material is moving along our line of sight.