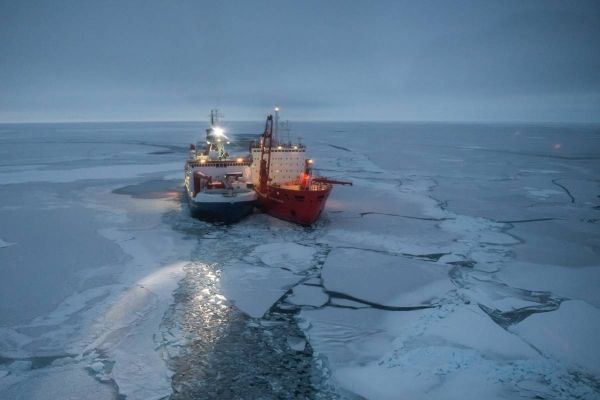 After only a few days of searching, experts from the MOSAiC expedition have now found a suitable ice floe, where they will set up the research camp for their one-year-long drift through the Arctic Ocean. Consequently, one of the most important milestones in the expedition has been reached ahead of schedule, and before the Polar Night falls. Nevertheless, the search, which involved satellite imagery, two icebreakers, helicopter flights and scouting missions on the surface of the ice, was an enormous challenge – partly because, after the warm summer, there were very few sufficiently thick floes in the expedition’s start region.

The die is cast: The MOSAiC team has now selected the floe that will serve as the base of operations for their one-year-long ice drift around the North Pole with the German research icebreaker Polarstern. This was preceded by an intensive search combining satellite imagery and helicopter flights over the target area in the Central Arctic, which were supported by the icebreaker Akademik Fedorov, operated by Russia’s Arctic and Antarctic Research Institute (AARI). The participating researchers closely examined 16 floes that, on the basis of satellite imagery, were potentially large enough to accommodate the ice camp. They subsequently met on board Polarstern to compare their findings, ultimately agreeing that the ice drift should be prepared for on a floe measuring roughly 2.5 by 3.5 kilometres, and located at 85 degrees north and 137 degrees east. The floe, which Polarstern will allow herself to become frozen to, is currently drifting in alternating directions, at up to 10 kilometres per day.

“After a brief but intensive search, we’ve found our home for the months to come. The ice floe is characterised by an unusually stable area, which we are confident can serve as a good basis and point of departure for establishing a complex research camp. Other parts of the floe are typical of the new Arctic, which is home to thinner, less stable ice. And precisely this combination makes it very well suited to our scientific projects. After carefully reviewing all relevant data, including that from our Russian partners, we came to the conclusion: it may not be the perfect floe, but it’s the best one in this part of the Arctic, and offers better working conditions than we could have expected after a warm Arctic summer,” explains MOSAiC expedition leader Markus Rex from the Alfred Wegener Institute, Helmholtz Centre for Polar and Marine Research (AWI). “We’ll have to wait and see if it’s also stable enough to withstand the autumnal storms that are now brewing. But we’re prepared for all scenarios,” he adds.