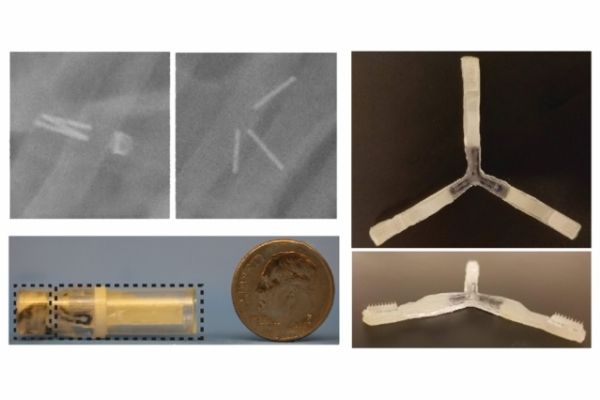 Many drugs, especially those made of proteins, cannot be taken orally because they are broken down in the gastrointestinal tract before they can take effect.

Many drugs, especially those made of proteins, cannot be taken orally because they are broken down in the gastrointestinal tract before they can take effect. One example is insulin, which patients with diabetes have to inject daily or even more frequently.

In hopes of coming up with an alternative to those injections, MIT engineers, working with scientists from Novo Nordisk, have designed a new drug capsule that can carry insulin or other protein drugs and protect them from the harsh environment of the gastrointestinal tract. When the capsule reaches the small intestine, it breaks down to reveal dissolvable microneedles that attach to the intestinal wall and release drug for uptake into the bloodstream.

“We are really pleased with the latest results of the new oral delivery device our lab members have developed with our collaborators, and we look forward to hopefully seeing it help people with diabetes and others in the future,” says Robert Langer, the David H. Koch Institute Professor at MIT and a member of the Koch Institute for Integrative Cancer Research.

Image: X-ray images at top left show the drug-delivery capsule in the intestine, before and after the arms expand. At right, the arms are unfolded to reveal the microneedles. Image courtesy of the researchers