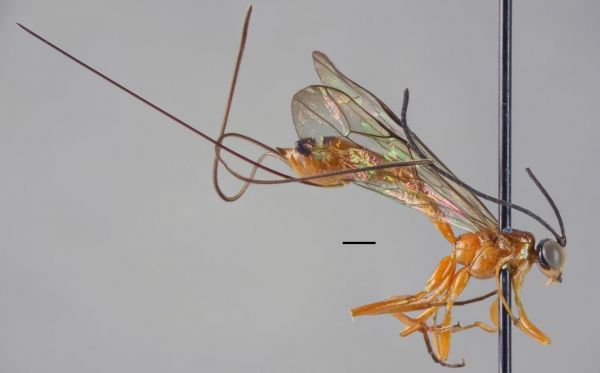 Scientists at the Biodiversity Unit of the University of Turku have studied the diversity of tropical parasitoid wasps for years.

Scientists at the Biodiversity Unit of the University of Turku have studied the diversity of tropical parasitoid wasps for years. Parasitoid wasps are one of the most species rich animal taxa on Earth, but their tropical diversity is still poorly known. Recently, the research group sampled Afrotropical rhyssine wasps, which are among the largest wasps. Scientists from three countries and research institutes participated in the research which was led by the University of Turku research group.

Rhyssines are sizeable wasps that parasitise the beetle or wasp larvae of decaying wood. The largest species can grow over ten centimetres in length. Females carry an extremely long ovipositor, which is used to drill through wood, stab and paralyse the host, and lay eggs.

Large-sized insect species are usually known better than small species, but tropical rhyssines are an exception.

"A good example of how poorly tropical rhyssines are known is the species Epirhyssa overlaeti, which is the largest African rhyssine. Only two females were known before, one collected in the 1930s in the Congo and the other one in Cameroon in the 1980s. Now, at one single Ugandan site, we found large numbers of both females and males. This completely changed what is known of the distribution of the species," says Doctoral Candidate Tapani Hopkins from the Biodiversity Unit of the University of Turku, who led the project.

Read more at University of Turku

Image: This is Epirhyssa johanna, a species new to science from Uganda. (Credit: Photo from the publication Hopkins et al. 2019)