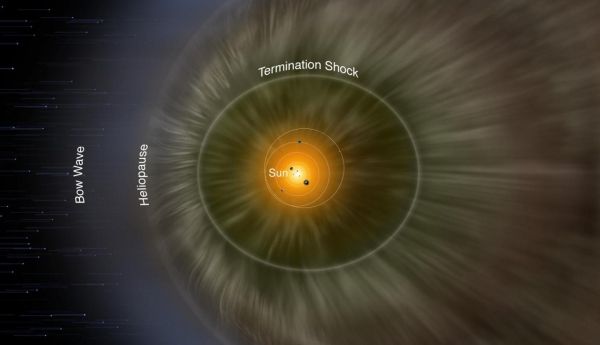 Out at the boundary of our solar system, pressure runs high.

Out at the boundary of our solar system, pressure runs high. This pressure, the force plasma, magnetic fields and particles like ions, cosmic rays and electrons exert on one another when they flow and collide, was recently measured by scientists in totality for the first time — and it was found to be greater than expected.

Using observations of galactic cosmic rays — a type of highly energetic particle — from NASA’s Voyager spacecraft scientists calculated the total pressure from particles in the outer region of the solar system, known as the heliosheath. At nearly 9 billion miles away, this region is hard to study. But the unique positioning of the Voyager spacecraft and the opportune timing of a solar event made measurements of the heliosheath possible. And the results are helping scientists understand how the Sun interacts with its surroundings.

“In adding up the pieces known from previous studies, we found our new value is still larger than what’s been measured so far,” said Jamie Rankin, lead author on the new study and astronomer at Princeton University in New Jersey. “It says that there are some other parts to the pressure that aren’t being considered right now that could contribute.”

On Earth we have air pressure, created by air molecules drawn down by gravity. In space there’s also a pressure created by particles like ions and electrons. These particles, heated and accelerated by the Sun create a giant balloon known as the heliosphere extending millions of miles out past Pluto. The edge of this region, where the Sun’s influence is overcome by the pressures of particles from other stars and interstellar space, is where the Sun’s magnetic influence ends. (Its gravitational influence extends much farther, so the solar system itself extends farther, as well.)

Image: This is an illustration depicting the layers of the heliosphere. (Credit: NASA/IBEX/Adler Planetarium)