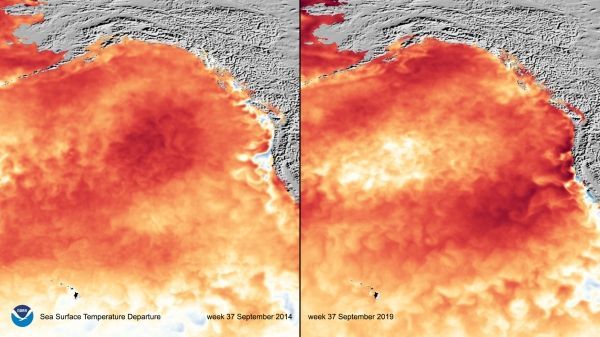 The new marine heat wave off the Pacific Coast is reminiscent of the early stages of the 2014–2016 “blob” that devastated marine life and is believed to have affected the weather.

This year’s expanse of unusually warm water stretches roughly from the Gulf of Alaska south to California and west all the way to Hawaii.

These marine heat waves occur when sea surface temperatures are warmer than 90 percent of past anomalous measurements at a specific location and time of year for more than 5 days. The Northeast Pacific Marine Heat Wave of 2019 (NEP19) was caused by weak summertime winds over much of the Northeast Pacific Ocean. A persistent ridge of high pressure over Alaska and a broad area of lower than normal pressure between Hawaii and the West Coast combined to weaken the normal summertime winds over this region.

“If there’s not enough wind at the surface [of the ocean], you don’t pull as much heat from the ocean into the atmosphere, or mix up the surface water into the deeper, colder water,” explained Andrew Leising, a research oceanographer with NOAA Fisheries’ Southwest Fisheries Science Center in La Jolla, Calif. “So what happens is, that surface layer just starts to heat.”

This year’s marine heat wave certainly mirrors the size of the blob — Leising notes the surface area is about six or seven times the size of Alaska, which covers more than 600,000 square miles. For reference, Alaska is bigger than Texas, California and Montana combined. While the heat wave events are roughly the same size, there are two important differences: