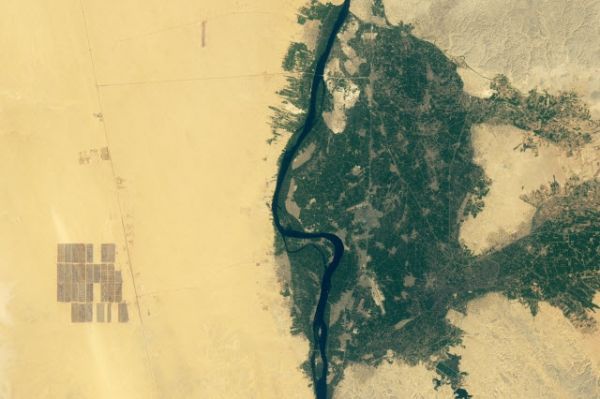 Egypt installs one of the largest solar energy farms in the world.

Egypt has plenty of oil and gas supplies underground. It also has an abundance of clear skies and sunlight. In 2019, the nation harnessed some of that energy with one of the largest solar energy installations in the world.

In Aswan province, about 650 kilometers (400 miles) south of Cairo, the $4 billion Benban Solar Park has sprung up from the desert. When finished, it will cover about 37 square kilometers (14 square miles) with more than 7 million photovoltaic solar panels. It is Egypt’s first utility-scale solar power facility, and it is projected to have the capacity to produce 1.8 gigawatts of electricity.

The natural-color images above were acquired by the Operational Land Imager on Landsat 8. The first shows Benban Solar Park on June 16, 2018, not long after the first sections went online. The second image shows the same area on October 9, 2019, when the solar park was about 80 percent complete. The wider view below shows the proximity to the Nile River and the towns of Kom Ombo and Daraw.

The drive for solar and other renewable power sources is more than a clean energy movement for Egypt. Five years ago, the nation’s peak electricity demand was 28 gigawatts (GW), while its production was just 24 GW. Blackouts were common. With 96 million people and a growing population and economy, Egypt projects that it will need to double its electric power capacity, which it is doing through a blend of solar, hydroelectric, and natural gas plants.