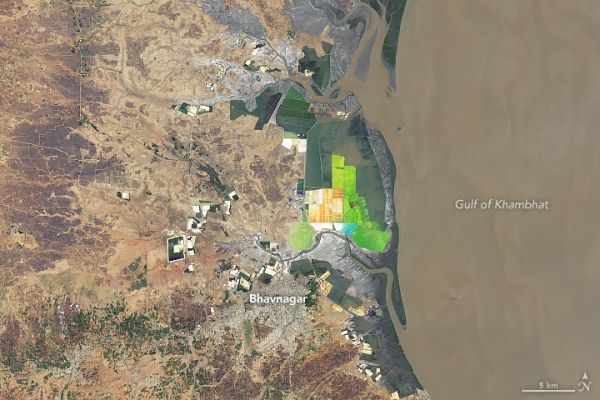 When India gained its independence in 1947, it had to import salt to meet its domestic needs. Today, it is the third largest salt producer in the world, exporting surplus salt across regions from Japan to Indonesia.

The majority of India’s salt production can be traced to one region: the west central-state of Gujarat. With more than 50 percent of salt workers located in Gujarat, the state accounts for almost three-quarters of the country's annual salt production.

These images show the city of Bhavnagar, which is located in one of the major salt-producing districts in the state. They were acquired on February 28, 2019, by the Operational Land Imager (OLI) on Landsat 8. The colorful rectangles are salt evaporation ponds and often seen in major salt-producing areas, such as the Makgadikgadi Pan in Botswana.