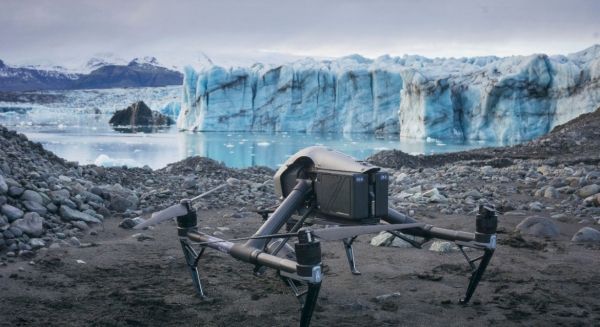 A new 3D process which involves old aerial photos and modern-day drone photography has shed light on accelerated ice loss from some of Iceland’s largest glaciers.

Dr Kieran Baxter from the University of Dundee has created composite images that compare views from 1980s aerial surveys to modern day photos captured with the help of state-of-the-art technology.

This revolutionary technique has allowed Dr Baxter to document the dramatic ice-loss on a group of outlet glaciers on the south side of Vatnajökull, one of the largest ice caps in Europe.

Aerial mapping photographs taken by the National Land Survey of Iceland were modelled in 3D using photogrammetry software. While this process is routinely used by scientists to measure the historical ice surface, here the models are aligned with current day drone photographs to highlight the impact of climate change on the region.

Dr Baxter, a researcher from the 3DVisLab at the University’s Duncan of Jordanstone College of Art & Design, led the two-year project in collaboration with the University of Iceland and the Icelandic Meteorological Office, who conduct glacier monitoring in the country.

Continue reading at University of Dundee

Image via University of Dundee