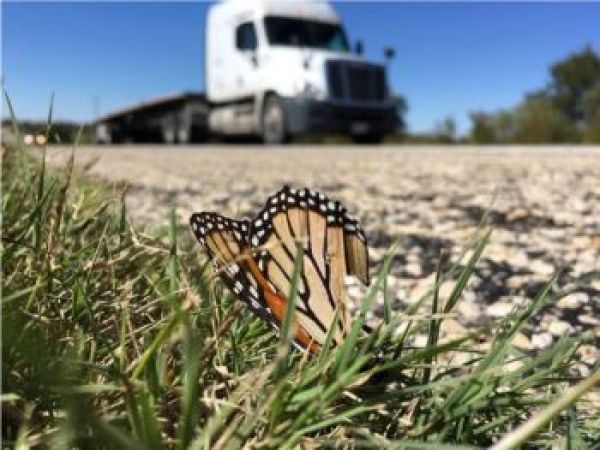 Monarch numbers have declined about 82% over the last 23 years, and road mortality can significantly contribute to their dwindling numbers.

Monarch butterflies are moving south through Texas on their annual autumn migration to overwintering sites in Central Mexico, but millions die in collisions with vehicles while flying low across Texas highways. Monarch numbers have declined about 82% over the last 23 years, and road mortality can significantly contribute to their dwindling numbers.

The monarch butterfly, Texas’ state insect, was petitioned for protection under the federal Endangered Species Act in 2014. In response, many individuals, agencies and organizations, including Texas A&M’s Department of Entomology, have been working to understand why the monarch population is so diminished and find solutions.

The early spring and closing autumn monarch migratory events occur in Texas. Some monarchs travel 3,000 miles from Canada to Mexico in the autumn, then return another 1,000 miles back to Texas and Oklahoma in the spring to lay eggs. This gives the monarch the distinction of the longest migration of any insect.

On their journey North in the spring, monarchs lay eggs on milkweeds and pass through two generations in Texas before dispersing throughout the Midwest and Eastern U.S. Later generations reach as far north as Canada by the end of summer. On the return journey south during the autumn, the butterflies move through narrowing areas on their migration to Mexico. They basically go through a geographic funnel during their return to Mexico in the fall.