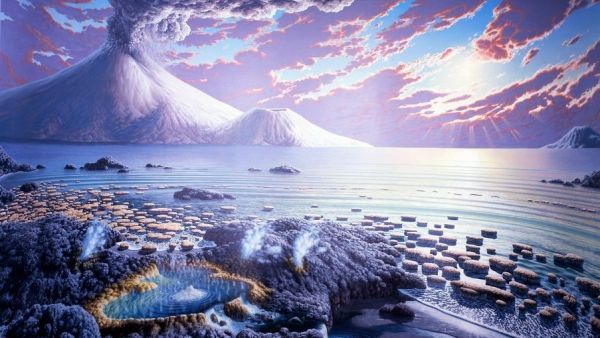 Scientists hope to learn more about the atmosphere of the pre-oxygenated Earth and the conditions in which the first life on Earth lived.

Mapping the bonds and vibrational modes of molecules containing sulfur isotopes is helping to shed light on the chemical reactions that took place in Earth’s atmosphere during the Archean era, before the atmosphere became oxygenated about 2.5 billion years ago.

The Archean is a geological eon that lasted from 4 billion years to 2.5 billion years ago. It saw the emergence of the first life on Earth, but these microbes were anaerobic, meaning they did not breath oxygen. In fact, during this time, Earth’s atmosphere did not contain any molecular oxygen. Instead, the atmosphere was rich with the likes of carbon and, particularly, sulfur.

The sulfur in the Archean Earth’s atmosphere was emitted by volcanic activity, and through a process called mass independent fractionation, sulfur’s various isotopes (sulfur atoms containing the same number of protons but different numbers of neutrons) became enriched in a manner that does not correlate with their mass. Evidence that this occurred is found in surface deposits dating back to the Archean, and it was these sulfur isotopes, as part of molecules such as hydrogen sulfide (H2S) and sulfur dioxide (SO2), which microbes metabolized, releasing oxygen in the process and beginning the process of oxygenating Earth’s atmosphere – a development referred to as the Great Oxygenation Event.