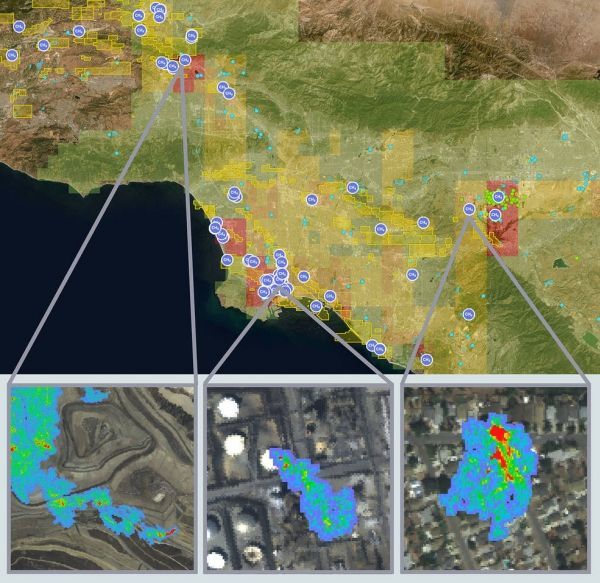 NASA scientists are helping California create a detailed, statewide inventory of methane point sources — highly concentrated methane releases from single sources — using a specialized airborne sensor. The new data, published this week in the journal Nature, can be used to target actions to reduce emissions of this potent greenhouse gas.

Like carbon dioxide, methane traps heat in the atmosphere, but it does so more efficiently and for a shorter period of time. Scientists estimate that most methane emissions in California are driven by industrial facilities, such as oil and gas fields, large dairies and landfills. To help reduce methane's impact on climate, the state has made cutting human-caused emissions a priority. But in order to cut these hard-to-detect emissions, they have to be measured and the sources identified.

NASA, through partnerships with the California Air Resources Board (CARB) and the California Energy Commission, set out to do just that. Over a two-year period, a research team at NASA's Jet Propulsion Laboratory in Pasadena, California, flew a plane equipped with the Airborne Visible InfraRed Imaging Spectrometer - Next Generation (AVIRIS-NG) instrument over nearly 300,000 facilities and infrastructure components in those sectors. The instrument can detect plumes of methane in great detail. Each pixel covers an area of about 10 feet (3 meters) across, which allows scientists to see even small plumes that often go undetected.

The team identified more than 550 individual point sources emitting plumes of highly concentrated methane. Ten percent of these sources, considered super-emitters, contributed the majority of the emissions detected. The team estimates that statewide, super-emitters are responsible for about a third of California's total methane budget.