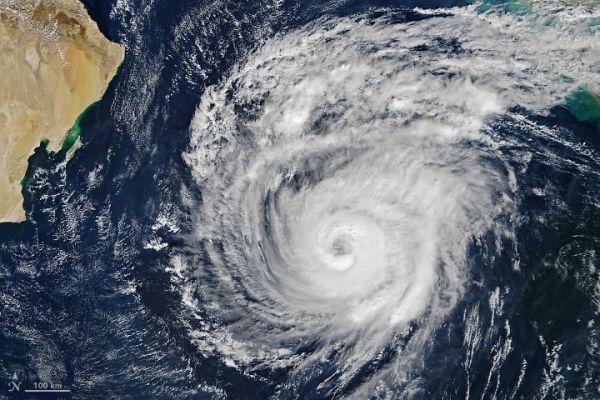 Tropical Cyclone Maha has taken a sharp turn over the Arabian Sea and is now poised to brush India’s west coast on November 7, 2019. By landfall, forecasters expect the storm to have weakened from its extremely severe peak on November 4, which was when the Moderate Resolution Imaging Spectroradiometer (MODIS) on NASA’s Terra satellite acquired this natural-color image. At the time, sustained winds measured 185 kilometers (115 miles) per hour—the equivalent of a category 3 storm on the Saffir-Simpson wind scale.

Considered in isolation, there’s nothing particularly unusual about Maha. However, in the context of the season and the basin, it is the latest in a series of strong tropical cyclones in an area that typically doesn’t see many. In fact, the North Indian basin is usually the least active in the Northern Hemisphere.

Activity in the world’s major ocean basins is visible in this map, which shows the historical tracks of storms between 1842 and 2017 as chronicled by NOAA. Brighter areas indicate where a large number of storm tracks have overlapped.

Notice the scarcity of storm tracks in the North Indian basin—particularly west of India—compared to other basins. On average, this North Indian region sees 4.8 storms per year that reach the strength of a “cyclonic storm” (tropical storm) or greater. Of those, just 1.5 reach the strength of “very severe cyclonic storm” (category 1 hurricane) or greater. For comparison, the northwestern Pacific—the busiest basin—sees an average of 26 tropical storms and 16.5 typhoons every year.