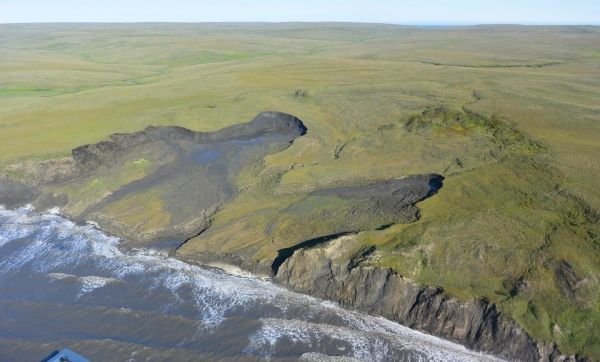 Permafrost coasts make up about one third of the Earth’s total coastline. As a result of accelerated climate change, whole sections of coastline rapidly thaw, and erode into the Arctic Ocean. A new study published in the journal Geophysical Research Letters now shows that large amounts of carbon dioxide are potentially being produced along these eroding permafrost coastlines in the Arctic.

“Carbon budgets and climate simulations have so far missed coastal erosion in their equations even though it might be a substantial source of carbon dioxide,” says George Tanski of Vrije Universiteit Amsterdam, lead author of the study. “Our research found that the erosion of permafrost coastlines can lead to the rapid release of significant quantities of CO2, which can be expected to increase as coastal erosion accelerates, temperatures increase, sea ice diminishes, and stronger storms batter Arctic coasts.”

The study was carried out during Tanski’s time at the Alfred Wegener Institute, Helmholtz Centre for Polar and Marine Research (AWI), and the GFZ German Research Centre for Geosciences. Co-Authors come from AWI, GFZ, and the Universities of Hamburg and Potsdam. The study is part of the Nunataryuk research project, coordinated by AWI. The project aims to analyse permafrost thaw, understand its impacts on indigenous communities and other populations, and develop mitigation and adaptation strategies.