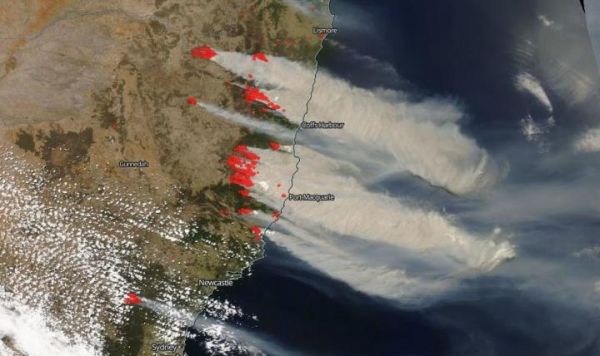 An unprecedented number of bushfires have erupted on the east coast of Australia due to hot, dry, windy weather.

An unprecedented number of bushfires have erupted on the east coast of Australia due to hot, dry, windy weather. Smoke billows from the scores of bushfires on Australia east coast in this image captured by NASA's Terra satellite on Nov. 08, 2019, using the Moderate Resolution Imaging Spectroradiometer (MODIS) instrument onboard. More than 100 bushfires have ignited and firefighters are rushing to quell the blazes in what they've dubbed "uncharted territory" in terms of size and number of the fires. New South Wales is dealing with drought-conditions and hot, windy weather contributes to the outbreak of these fires. Currently the fires stretch from the Blue Mountains to the border of Queensland which is seeing its own fire emergency with more than 50 blazes across that state. There is some hope that cooler weather coming in will assist with fighting the fires, but unfortunately the extended forecast looks for more hot, windy weather coming back next week.  On the New South Wales Rural Fire Service (NSW RFS) website, a map showing the locations of the the various bushfires can be found. Totalling just the "out of control" fires finds that 365,532 hectares (903,249 acres) are burning out of control. This does not include any bushfires that are deemed "under control."

NOAA/NASA's Suomi NPP satellite can measure the aerosols within the smoke that is coming off these bushfires. The OMPS Aerosol Index (PyroCumuloNimbus) layer indicates the presence of ultraviolet (UV)-absorbing particles in the air (aerosols) such as desert dust and soot particles in the atmosphere; it is related to both the thickness of the aerosol layer located in the atmosphere and to the height of the layer. The PyroCumuloNimbus layer differs from the Aerosol Index layer because in the case of pyrocumulonimbus events, which are both dense and high in the atmosphere, the AI value can easily become much larger than 5.0. In this image the purple sections of the image which start the index at the 5.0 level where the regular aerosols leave off and continue through the spectrum to a light pinkish color for the highest values which can be greater than 50. This layer is useful for identifying and tracking high Aerosol Index value events and makes it easier to track the spread of high aerosol concentrations in the atmosphere. For the layer that shows up as red and yellow this is from the OMPS Aerosol Index without the pyrocumulonimbus events and the values of the tracking go from 0.00 to 5.00. The highest concentrations of aerosols within this level are deep red in color and these indicate heavy concentrations of aerosols in the lower atmosphere that could reduce visibility or impact human health. This Aerosol Index layer is useful for identifying and tracking the long-range transport of volcanic ash from volcanic eruptions, smoke from wildfires or biomass burning events and dust from desert dust storms, even tracking over clouds and areas of snow and ice.

Aerosols absorb and scatter incoming sunlight, which reduces visibility and increases the optical depth. Aerosols have an effect on human health, weather and the climate. Sources of aerosols include pollution from factories, smoke from fires, dust from dust storms, sea salts, and volcanic ash and smog. Aerosols compromise human health when inhaled by people with asthma or other respiratory illnesses. Aerosols also have an affect on the weather and climate by cooling or warming the earth, helping or preventing clouds from forming.

Image: Bushfires on the east coast of Australia are burning out of control (Credit: NASA Worldview)