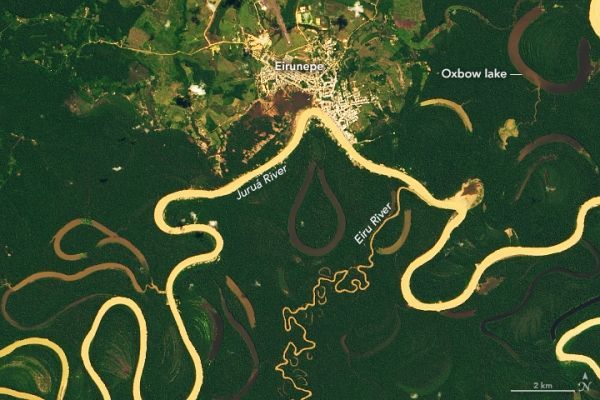 Research indicates that a heavy sediment load might cause additional meandering in rivers.

The Juruá River emerges from highlands in east-central Peru, then winds its way through lowlands in Brazil. By the time it empties into the Amazon River near Fonte Boa, the river course spans more than 3000 kilometers (2,000 miles). But as the crow flies, the distance between the river’s source and mouth is only about 1000 kilometers (600 miles).

Meanders make up two thirds of the Juruá’s length, making it one of the most sinuous rivers in the Amazon Basin. On May 27, 2019, the Operational Land Imager (OLI) acquired this image of a stretch near Eirunepé, a settlement established in the 1800s as a hub for rubber production. A semicircle of land has been cleared around the city (light green), probably for ranching. Buildings and roads (white) are clustered along the river, which flows through seasonally flooded wetland forests known as várzea (dark green).