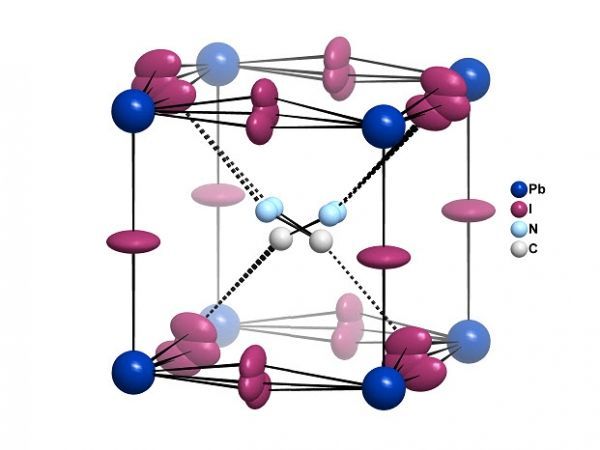 Solar cells based on perovskites have reached enormously high efficiencies within a few years, only.

Solar cells based on perovskites have reached enormously high efficiencies within a few years, only. Those containing hybrid halide perovskite, i.e. materials containing inorganic and organic components, achieve particularly high efficiencies, but lack long-term stability, yet. Even though inorganic perovskite semiconductors, such as CsPbI3, are less efficient, they are considered interesting, as well, since they may overcome the stability issues of hybrid perovskites.

Up to now, it was assumed that hybrid and purely inorganic perovskites do not differ fundamentally in their crystalline structure. When producing perovskite materials, it often occurs that no large single crystals are formed, but countless tiny twin crystals instead. This makes a crystal structure analysis particularly complicated and prone to errors and low precision.

An HZB team headed by Prof Susan Schorr and Dr Joachim Breternitz has now achieved a breakthrough in understanding the crystalline structure of hybrid halide perovskites. The team investigated crystalline samples of methylammonium lead iodide (MAPbI3), the most prominent representative of this class of materials, at the Diamond Light Source synchrotron (DLS) in the United Kingdom using high-resolution single-crystal diffraction. This approach provided data for a more in-depth analysis of the crystalline structure of this material.

Image: The drawing illustrates the interaction of the organic methylammonium cation (CH3NH3+) with the surrounding iodide ions. The shift of the iodide atoms out of the common plane with lead causes the breaking of the inversion symmetry.  CREDIT: Helmholtz-Zentrum Berlin