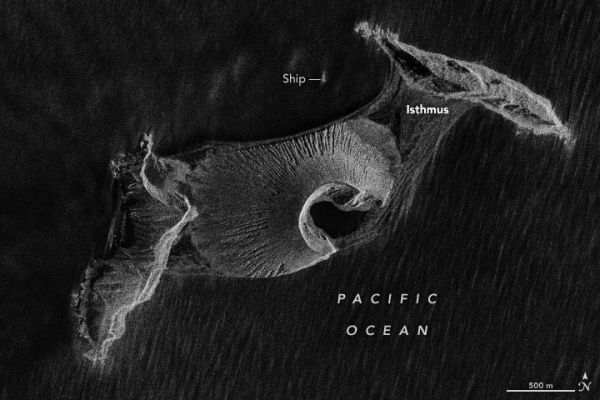 Against the odds, the landmass that exploded and oozed into existence in early 2015 is now nearly five years old.

The recently formed volcanic island unofficially known as Hunga Tonga-Hunga Ha‘apai was not expected to survive the erosive and relentless lashing of the sea. But against the odds, the landmass that exploded and oozed into existence in early 2015 is now nearly five years old, and still standing.

Researchers have used that time to build a case study on the rarely observed process of an island growing from an undersea volcano and subsequently decaying in Earth’s erosive environment. Islands formed by these surtseyan-type eruptions are typically hard to observe, given that they occur in remote oceanic locations and erode away before they are spotted in most instances. In fact, Hunga Tonga-Hunga Ha‘apai—which formed after an undersea eruption that began in December 2014 in the Tongan archipelago—is the first such island to be intensively studied by satellites during its early lifetime.

Radar imaging satellites are one way that NASA scientists Jim Garvin and Dan Slayback are studying the island’s evolution at new time scales. Synthetic aperture radar (SAR) provides high-resolution imaging data day or night, when skies are cloudy or clear; that’s particularly important in a cloudy tropical location like the Tonga archipelago. The SAR image above was acquired on October 8, 2019, by the Canadian Space Agency’s RADARSAT-2. (Data are copyright Maxar Technologies Ltd., 2019.)