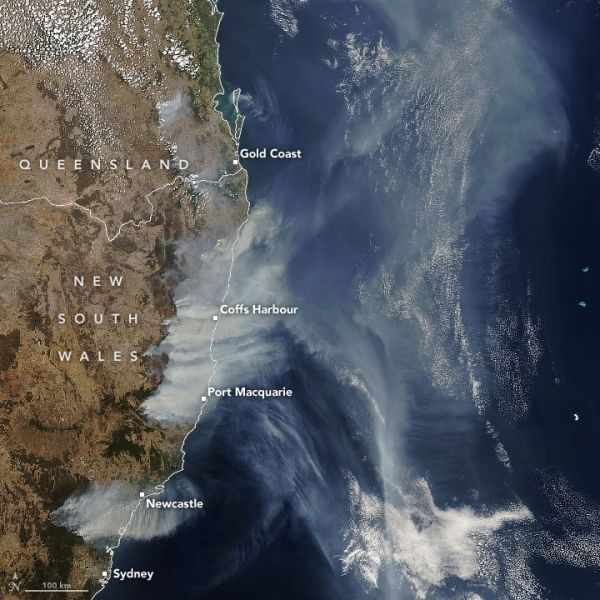 According to researchers, the smoke plumes from the Australian fires have risen as high as 12 to 13 kilometers (7 to 8 miles) in the atmosphere.

Three weeks into November 2019, springtime bush fires continued to blaze across southern and eastern Australian states. As of November 20, government agencies counted 45 fires in South Australia and 49 in New South Wales, and dangerously dry and windy weather was fanning flames in Victoria and Queensland.

The fires have sent smoke rising high into the atmosphere and half-way around the world, with satellites detecting aerosols and other smoky pollutants crossing the Pacific and moving over the South Atlantic Ocean. Locally, the smoke has blanketed the Sydney metropolitan area, significantly degrading air quality.

On November 19, 2019, the Moderate Resolution Imaging Spectroradiometer (MODIS) on NASA’s Aqua satellite acquired a natural-color image (above) of thick smoke plumes rising from New South Wales (NSW) and Queensland. The animation below depicts the abundance and direction of black carbon blowing through the atmosphere from November 1-18.