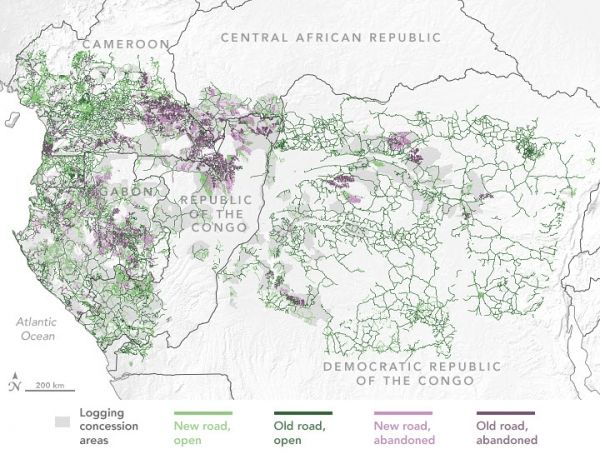 Road networks in the Congo rainforest have significantly increased over the past decades, but not all paths lead to long-term destruction.

After driving through the Congo rainforest for half a day, researcher Fritz Kleinschroth hopped out of the pick-up truck to find more than a dozen butterflies caught in the front radiator grille. The butterflies varied in orange, red, white, and blue, representing just a sliver of the diversity of insects and wildlife living in the Congo Basin. The driver of the logging truck was less focused on the butterflies and more enthusiastic about the drive through the rainforest. On this new dirt road, drivers could roll along at 120 kilometers (75 miles) per hour and reach previously remote areas.

To Kleinschroth, the memory from his 2017 visit to the Republic of Congo symbolizes the struggle in the rainforests of central Africa: how can people boost the local economy but minimize their footprint on the ecosystem? How can people build roads that bring in lucrative business without permanently destroying the habitats of the butterflies, chimpanzees, and elephants?

Finding this balance has become more urgent in recent decades, as more roads have been cutting across the Congo Basin, which spans six countries and contains the world’s second largest tropical forest. Roads often lead to more human activity and to unregulated or destructive events in the rainforest. They make it easier for people to move deeper into the rainforest for poaching, mining, or illegal logging.