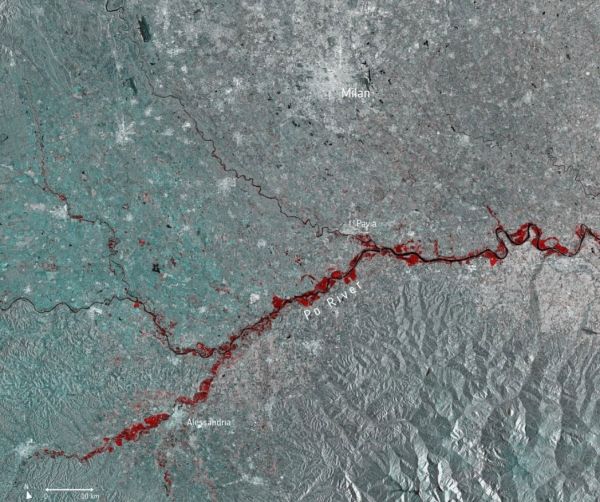 Satellite images acquired before and after flooding offer immediate information on the extent of inundation and support assessments of property and environmental damage.

Torrential downpours have battered many parts of Italy this month, with extreme flooding wreaking havoc across northern Italy. The province of Alessandria is said to be one of the worst-affected areas according to Italian media, with around 200 people evacuated and 600 said to be left stranded.

This multi-temporal image uses two separate images captured by the Copernicus Sentinel-1 mission on 13 November and 25 November. The flooded areas can be seen depicted in red, the Po River in black, and urban areas in white.

Copernicus Sentinel-1’s radar ability to ‘see’ through clouds and rain, and in darkness, makes it particularly useful for monitoring floods. It can even easily differentiate water bodies, highlighting the difference between the Po River in black, and the extent of the flooding in red.