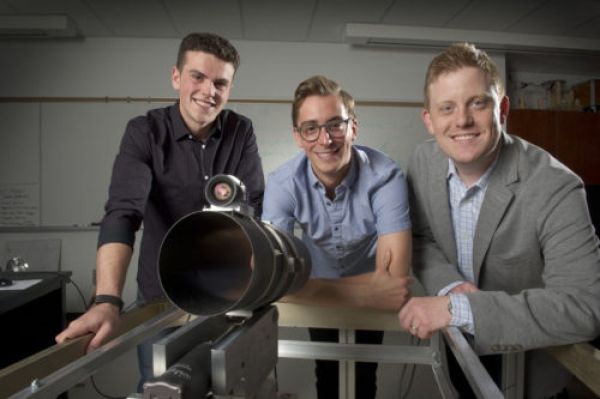 Shooting for the moon has paid off for University of Guelph engineers.

Shooting for the moon has paid off for University of Guelph engineers.

Working with a NASA team, the researchers helped design a first-ever moonlight tracking device that will ultimately improve the accuracy of numerous Earth-observing satellites monitoring everything from weather to vegetation cover to ocean temperatures.

In a series of test flights this month aboard a high-altitude plane, a U of G-made robotic telescope mount performed even better than NASA’s hoped-for accuracy targets. That makes the device a likely key component for ensuring performance of satellites used to detect large-scale weather patterns and signs of climate change on Earth, said engineering professor Andrew Gadsden.

“We wanted to use pure moonlight to calibrate sensors on satellites,” said Gadsden, who is co-principal investigator of an international research team that built the NASA-funded instrument. Referring to last week’s successful trials of his lab’s ARTEMIS (Autonomous Robotic Telescope Mount Instrument Subsystem) technology, he said, “NASA will have a model to do that.”