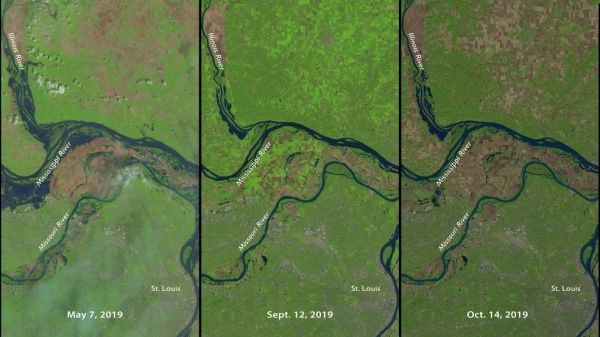 Since 2009, NASS has drawn on Landsat data to monitor dozens of crops, including corn, wheat, soy and cotton in the lower 48 states as part of NASS’s Cropland Data Layer program.

Farmers across the Midwest are in a race to finish harvesting their corn, soybean, and other staples of the Thanksgiving dinner table before the first crop killing freeze sets in. September rains made a late harvest even later. Heavy spring rains flooded millions of acres of cropland around the Mississippi, Wisconsin and Missouri rivers. Some farmers never seeded; others started three weeks behind schedule.

These changes and delays in farmers’ plans this year made the United States Department of Agriculture’s job of tracking and estimating crop production with farmer surveys and ground observations a challenge. To meet it, they turned to the joint NASA - U.S. Geological Survey’s Landsat 8 satellite to fill in the missing pieces

“During abnormal growing seasons or natural disasters, satellites shine,” said Rick Mueller, Head of USDA’s National Agricultural Statistics Service, or NASS Spatial Analysis Research Section and manager of the Cropland Data Layer Program in Washington. “Landsat is a robust and independent way to validate what our statistics are telling us.”