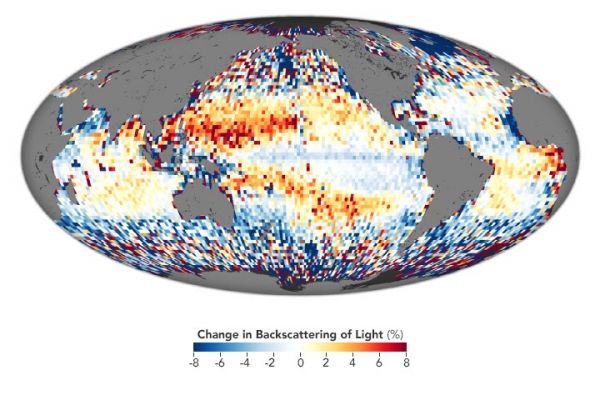 Every night, under the cover of darkness, countless small sea creatures swim from the ocean depths to feed near the surface, then descend out of sight again before daybreak.

This vast animal migration—a critical part of Earth’s carbon cycle—has been observed for the first time on a global scale thanks to a space-based laser.

The phenomenon is known as diel vertical migration (DVM). Small sea creatures—from copepods (photo below) to squid to krill—swim up from the deep at night to feed on phytoplankton, then return to the depths just before sunrise. The principal reason for this migration is for some marine creatures to avoid visual predators that would consume them near the surface in daylight.

This natural daily movement has been observed from ships for decades, though in limited areas and times. It is considered the largest migration on Earth by total number of animals. Now researchers have observed it for a decade at the scale of entire gyres and basins of the ocean, thanks to the Cloud-Aerosol Lidar and Infrared Pathfinder Satellite Observations (CALIPSO) satellite. Launched in 2006 by NASA and the Centre National d'Etudes Spatiales, CALIPSO was built to study phenomena in the atmosphere such as clouds, dust, pollution, and volcanic ash. But the satellite’s laser also can penetrate the upper 20 meters of the ocean, so if migrating animals reach this layer, CALIPSO can see them.