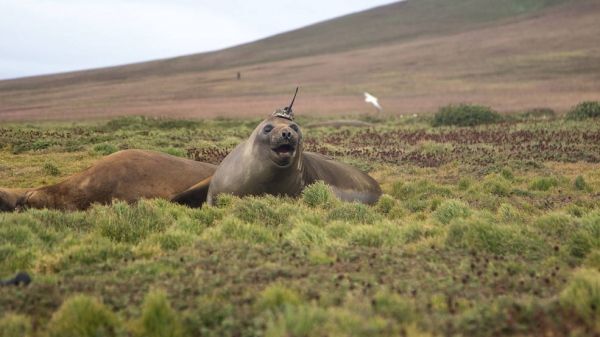 Satellite data are used to identify characteristics of the waters through which specially-tagged seals swim.

The Antarctic Circumpolar Current flows in a loop around Antarctica, connecting the Atlantic, Pacific and Indian oceans. It is one of the most significant ocean currents in our climate system because it facilitates the exchange of heat and other properties among the oceans it links.

But how the current transfers heat, particularly vertically from the top layer of the ocean to the bottom layers and vice versa, is still not fully understood. This current is very turbulent, producing eddies — swirling vortices of water similar to storms in the atmosphere — between 30 to 125 miles (50 to 200 kilometers) in diameter. It also spans some 13,000 miles (21,000 kilometers) through an especially remote and inhospitable part of the world, making it one of the most difficult currents for scientists — as least those of the human variety — to observe and measure.

Luckily for Lia Siegelman, a visiting scientist at NASA's Jet Propulsion Laboratory in Pasadena, California, the rough seas posed no challenge for her scientific sidekick: a tagged southern elephant seal.

Equipped with a specialized sensor reminiscent of a small hat, the seal swam more than 3,000 miles (4,800 kilometers) on a three-month voyage, much of it through the turbulent, eddy-rich waters of the Antarctic Circumpolar Current. The seal made around 80 dives at depths ranging from 550 to 1,090 yards (500 to 1,000 meters) per day during this time. All the while, it collected a continuous stream of data that has provided new insight into how heat moves vertically between ocean layers in this volatile region — insight that brings us one step closer to understanding how much heat from the Sun the ocean there is able to absorb.