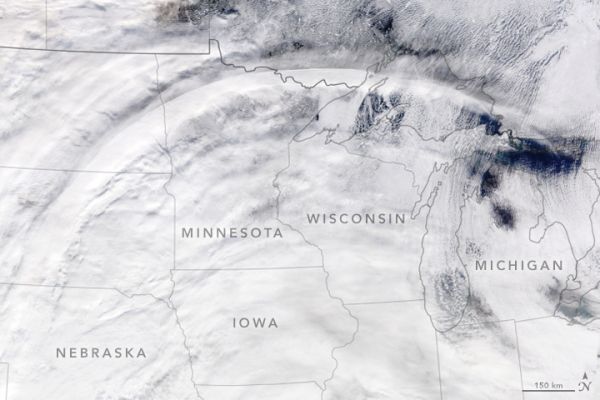 Circulation around a jet streak—a fast-moving pocket of air within the jet stream—formed this distinctive arc of clouds.

Chances are good that you have heard of the jet stream, a river of fast-moving air in the upper levels of the atmosphere. World War II pilots were among the first to notice jet stream winds, which play a key role in steering air masses and storms around the globe.

Jet streaks—pockets of extremely fast winds embedded within the jet stream—are mentioned less often. Yet they are important to the formation of winter storms because they are associated with rising air, which can trigger clouds and precipitation.

The presence of a jet streak is not often apparent in natural-color satellite imagery, but occasionally there are tell-tale signs. That was the case on November 28, 2019, when the Moderate Resolution Imaging Spectroradiometer (MODIS) on NASA’s Terra satellite captured this image of a wide arc of clouds stretching across the northern United States. At the time, a powerful winter storm was building in the East.