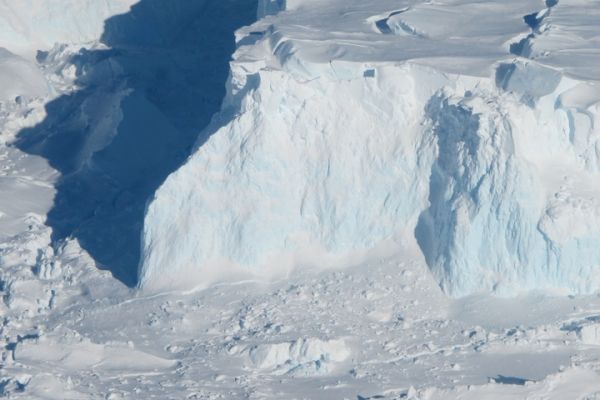 The loss of the ice shelf supporting one of Antarctica’s most vulnerable glaciers could hasten its collapse, a new study finds.

Thwaites Glacier, a sheet of ice about the size of Florida, lies in West Antarctica. Scientists have monitored this region for decades because it contributes about a tenth of current global sea level rise, according to a 2017 study. Researchers attribute the thinning glaciers in this region to warming ocean water in the Amundsen Sea, which intrudes under the glaciers and melts them from beneath.

The new study in the AGU journal Geophysical Research Letters modeled how much faster Thwaites, one of the region’s largest and fastest-retreating glaciers, would retreat in the absence of its ice shelf — the part of the glacier that floats on top of the sea, supporting the thicker ice behind.

“We think that possibly in a few years or decades, we don’t know yet, the remainder of the ice shelf in front of Thwaites might be gone,” explained Hongju Yu, an assistant specialist at the University of California, Irvine and lead author of the new study.