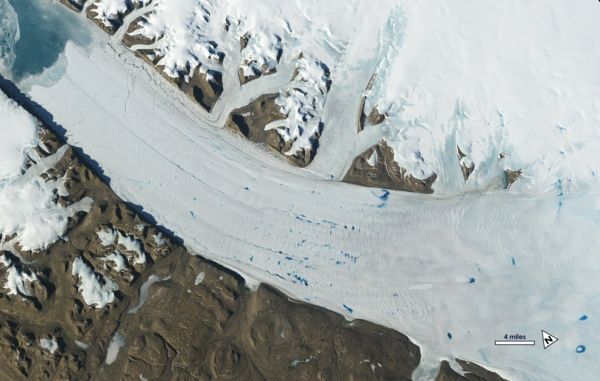 New time-lapse videos of Earth’s glaciers and ice sheets as seen from space – some spanning nearly 50 years – are providing scientists with new insights into how the planet’s frozen regions are changing.

At a media briefing Dec. 9 at the annual meeting of the American Geophysical Union in San Francisco, scientists released new time series of images of Alaska, Greenland, and Antarctica using data from satellites including the NASA-U.S. Geological Survey Landsat missions. One series of images tells illustrates the dramatic changes of Alaska’s glaciers and could warn of future retreat of the Hubbard Glacier. Over Greenland, different satellite records show a speed-up of glacial retreat starting in 2000, as well as meltwater ponds spreading to higher elevations in the last decade, which could potentially speed up ice flow. And in Antarctic ice shelves, the view from space could reveal lakes hidden beneath the winter snow.

Using images from the Landsat mission dating back to 1972 and continuing through 2019, glaciologist Mark Fahnestock of the University of Alaska Fairbanks, has stitched together six-second time-lapses of every glacier in Alaska and the Yukon.

“We now have this long, detailed record that allows us to look at what’s happened in Alaska,” Fahnestock said. “When you play these movies, you get a sense of how dynamic these systems are and how unsteady the ice flow is.”