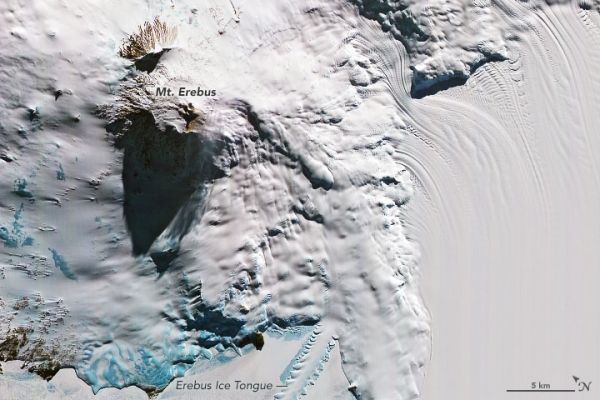 The low Sun angle illuminated the eastern slopes of the Antarctic volcano, casting a long shadow to the west.

Most of the Antarctic continent is buried under the planet’s largest single mass of ice. But there are a few landmarks that stand out from the endless white, including a volcano that continuously emits gases and occasionally erupts. Mount Erebus is Earth’s southernmost active volcano.

Erebus is featured in this image acquired on October 19, 2019, by the Advanced Spaceborne Thermal Emission and Reflection Radiometer (ASTER) on NASA’s Terra satellite. The image is false-color but looks natural, which is a result of visible and near-infrared wavelengths of light (ASTER bands 3, 2, 1).

The area was just days away from constant 24-hour sunlight when this image was acquired. The Sun angle was still low enough that morning to illuminate the volcano’s eastern slopes, while the volcano cast a mighty shadow to the west. That’s not hard to do, given that the volcano stands 3,794 meters (12,450 feet) above sea level—the second-tallest of more than 100 known Antarctic volcanoes.