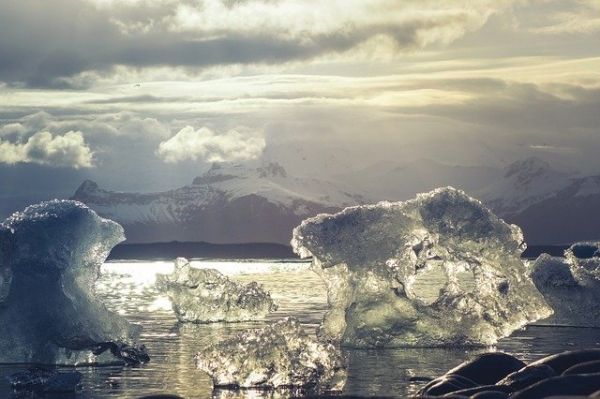 For the first time during the MOSAiC expedition, a multi-wavelength lidar provides data on fine dust in the central Arctic during polar night.

RV Polarstern (86°N,121°E). The atmosphere of the central Arctic is polluted with fine dust from Siberia and North America. This was the result of a preliminary evaluation of the first lidar measurements carried out by the Leibniz Institute for Tropospheric Research (TROPOS) during the one-year MOSAiC expedition on board of the RV Polarstern. For the first time, a multi-wavelength lidar was used during polar night in the central Arctic, which can measure dust particles at altitudes of up to 14 kilometres with laser pulses from the ground. First data show several layers of dust from human sources and forest fires at altitudes of 5, 6 and 12 kilometres. The data are an indication that the upper atmosphere of the region around the North Pole is more polluted in winter than previously assumed. In the coming months, the international MOSAiC expedition led by the Alfred Wegener Institute, the Helmholtz Centre for Polar and Marine Research (AWI), will provide data on climate change in the central Arctic, for which almost no measurements are available due to the extreme conditions of polar night.

On 4 October, the research vessel Polarstern reached the ice floe at 85°North and 137°East with which the icebreaker and an extensive measuring network on the ice intend to drift through the central Arctic at the North Pole for a year. With the official start of the MOSAiC expedition, the OCEANET container on board Polarstern also began its work. "Together with the containers of our US and Swiss partners, our container is located on the foredeck of RV Polarstern. I was able to put our laser into operation immediately after the end of the loading work. The aim is to measure the suspended particles in the atmosphere above the ship around the clock for a year," reports Dr Ronny Engelmann of TROPOS, who is in charge of the measurements on board during the first leg of the voyage until he is replaced in December 2019.