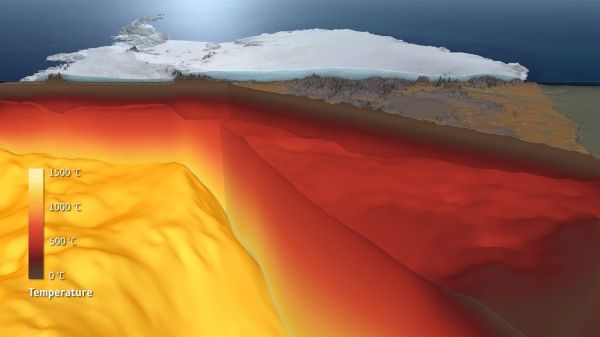 European Space Agency publishes a 3D model of the Antarctic.

The Antarctic is one of the parts of earth that we know the least about. Due to the massive ice shield, the collection of geophysical information on site is extremely difficult and expensive. Satellite data from the European Space Agency (ESA) has now been used as the basis for new insights on the deep structure of the continent. Scientists from Kiel University (CAU) recently published their discoveries in the Journal of Geophysical Research: Solid Earth in cooperation with scientists from the British Antarctic Survey, Great Britain, and Delft University of Technology in the Netherlands.

The newly evaluated data from the ESA’s GOCE satellite mission dedicated to the earth's gravitational field, combined with seismological models, enables unprecedented insights into the lithosphere, which consists of the crust and the earth’s upper mantle below the frozen continent. To do so, Folker Pappa, doctoral researcher at Kiel University and lead author of the study, along with Jörg Ebbing, Professor for Geophysics at Kiel University, used special gradient data of the satellite, among other information: “This allows a much greater level of detail when analysing deep earth structures,” says Pappa. It enables the researchers to draw conclusions about such things as the depth of the transition from crust to mantle – and these measurements are dramatically different over the 14 million square kilometre region. “Under West Antarctica, which is geologically young, the earth's crust is comparatively thin with about 25 kilometres, and the earth's mantle is viscous at a depth of less than 100 kilometres. East Antarctica, on the other hand, is an old cratonic shield and more than one billion years old. Here, the mantle rocks still have solid properties at a depth of more than 200 kilometres.”