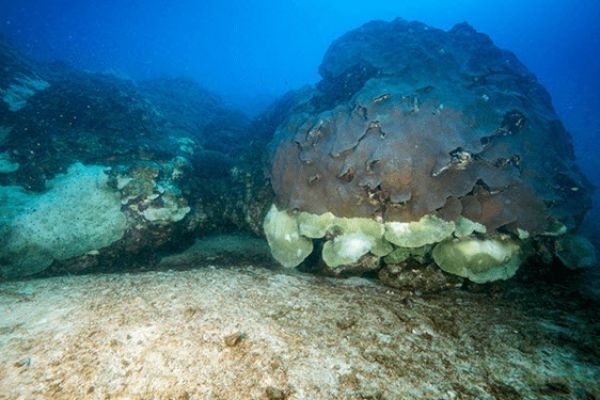 A Texas A&M research team says processes leading to hypoxia led to the death of parts of the reefs at the Flower Garden Banks National Marine Sanctuary.

Three years ago, parts of coral reefs in the Flower Garden Banks National Marine Sanctuary were killed in a dramatic event. What caused the death of the large and colorful reefs about 100 miles from the Galveston coast – with up to 80 percent mortality in some areas – was a mystery.

A team of oceanographers from Texas A&M University believes it has an explanation. Considered some of the healthiest coral reefs remaining in the Caribbean and Gulf of Mexico, the reefs at the Flower Garden Banks grow on top of shallow, submerged banks in otherwise deep water. The Texas A&M team’s research, which was recently published in the current issue of Coral Reefs, found that two separate processes caused hypoxia on the reef, leading to the die-off.

Researchers from the Department of Oceanography included Katie Shamberger, Shawn Doyle, Jason Sylvan, Robert Hetland and Steven DiMarco, along with Andrea Kealoha, now at the University of Hawaii Maui College. The team found that hypoxia – low levels of oxygen – was caused by the transport of freshwater runoff from the Mississippi, Atchafalaya, and Brazos Rivers, and an upwelling of deep, dense water onto the reef.

“We believe the combination of two different processes – river runoff and upwelling – caused localized hypoxia that killed invertebrates on the reef,” Shamberger said. “In other words, both processes happened simultaneously to cause hypoxia and one of them alone may not have caused any trouble.”