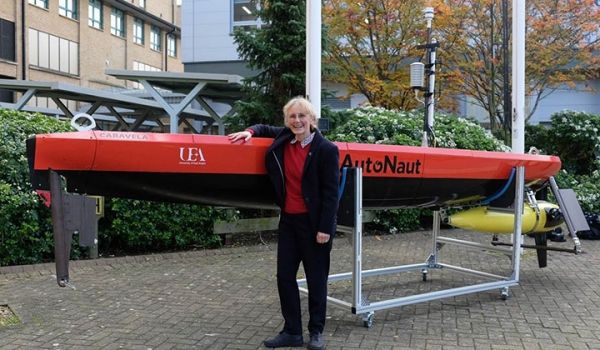 A researcher at the University of East Anglia (UEA) has helped design a sea-going robot to deploy research equipment in remote and inaccessible ocean locations.

The AutoNaut - an unmanned surface vessel - has been specially-adapted to carry and release an underwater Seaglider. The gliders carry a range of sensors to collect data for research on ocean processes that are important for climate.

The Seagliders are the same size as a small human diver, but can reach depths of 1000 metres and travel the ocean by itself for months, covering thousands of kilometres. However they are difficult to launch inshore and usually have to be deployed from ships, which can make timing the release of the glider tricky.

It can also take a long time, and a lot of battery life, to reach remote study sites. Other locations can be dangerous to access because of piracy or political tensions.

Built by UK firm AutoNaut Ltd, the five metre long AutoNaut can be deployed from a beach or a ship and it can wait in position until the Seaglider is ready to be released by remote pilots.

Image via University of East Anglia