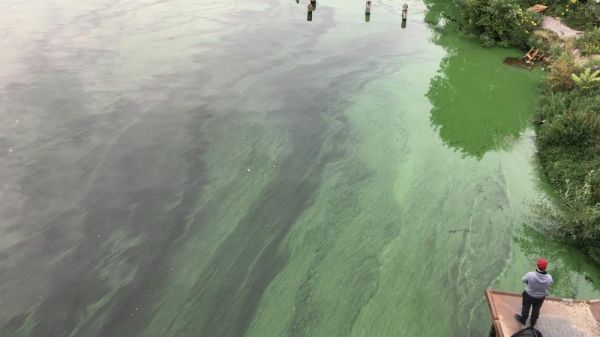 Cyanobacteria, also known as blue-green algae, are among the most common organisms on Earth.

Cyanobacteria, also known as blue-green algae, are among the most common organisms on Earth. A research team led by the Leibniz-Institute of Freshwater Ecology and Inland Fisheries (IGB) and Heidelberg University has now shown for the first time that Cyanobacteria produce relevant amounts of methane in oceans, inland waters and on land. Due to climate change, “Cyanobacteria blooms” increase in frequency and extent, amplifying the release of methane from inland waters and oceans to the atmosphere.

Methane generation by microorganisms is traditionally considered to take place only under strictly anoxic conditions by microbes of the domain Archaea. This assumption is refuted by the results of the present study led by Dr. Mina Bižić from IGB. The international research team investigated seventeen cyanobacterial species that occur in the sea, freshwater and soil. "Cyanobacteria in surface water are a previously unknown source of methane and we were able to show for the first time that these bacteria produce the greenhouse gas methane during photosynthesis," states Dr. Mina Bižić. To do so, Thomas Klintzsch from Heidelberg University used isotopically labelled carbon to evaluate how methane is formed in the cell during the conversion of light energy into chemical energy.

In laboratory experiments, the team compared the amount of methane produced by Cyanobacteria with the amounts produced by methanogenic archaea and organisms with cell nuclei (eukaryotes). "Cyanobacteria produce less methane than archaea, but more methane than eukaryotes. It is difficult to estimate the global amount of methane produced by Cyanobacteria because there is a severe lack of detailed data on the biomass of these organisms in water and soil," says co-author Frank Keppler, Professor at the Institute of Earth Sciences at Heidelberg University.