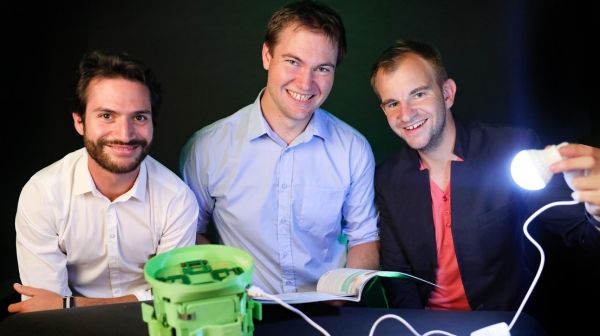 Over a billion people worldwide live without electricity.

Over a billion people worldwide live without electricity. The problem is especially acute in rural areas of Sub-Saharan Africa, where many families spend their evenings in darkness and most cell phone owners are unable to charge their device at home.

hiLyte, a startup founded by two graduates of EPFL’s School of Engineering (STI), has developed a clean, affordable battery using iron, water, coffee filters and carbon felt. With a single charge, the battery can power an LED bulb for five hours or charge a cell phone. Once used, the liquid inside can be safely released into the environment.

A dozen of prototypes manufactured and distributed through a local branch managed by local staff are currently being tested in families. “Our technology has the potential to change people’s everyday lives,” says Briac Barthes, who holds a Master’s in Mechanical Engineering and co-founded the company. “For one of the pilot families, the battery allowed their daughter to study in the evening. Having light can also transform the way people interact, bringing socialization opportunities for isolated and vulnerable families.”