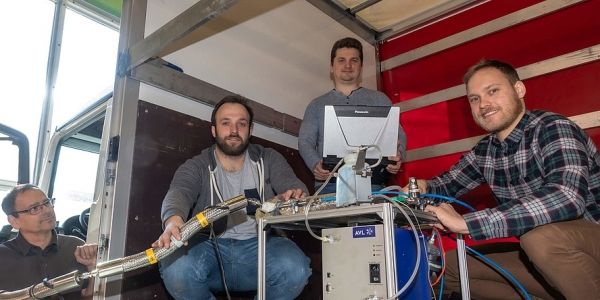 Researchers at Graz University of Technology have developed a measurement method that measures particles below 10 nanometres for the first time and will contribute to the implementation of future, stricter emission standards.

A few days ago, the European Commission presented its Green Deal, which aims to make the EU climate neutral by 2050 in order to protect the environment and improve people's health and quality of life. One of the planned measures is the introduction of stricter exhaust regulations. The limit values for pollutant emissions from vehicles have already been laid down by law. The current target value is 6x1011 particles per kilometre (Euro 6d-Temp), but only particulate matter bigger than 23 nanometres (nm) is regulated. Smaller nanoparticles, such as those emitted by new and future generations of combustion engines in even greater numbers, cannot currently be detected in exhaust emission tests. However, this fine dust is even more harmful to health since particles of this size can penetrate unhindered into the lungs.

As part of the Horizon 2020 project DownToTen, researchers from TU Graz and an international consortium have now developed a new method by which particles down to a size of 10 nm can be measured for the first time. Tests on the chassis dynamometer of TU Graz’s Institute of Internal Combustion Engines and Thermodynamics confirm the robustness of the process, as do tests in practical driving operation (Real Driving Emissions – RDE).

Markus Bainschab, a researcher at TU Graz’s Institut für Elektrische Messtechnik und Sensorik (former Institute of Electrical Measurement and Measurement Signal Processing and Institute of Electronic Sensor Systems) who is also in charge of the development of the new measuring system explains why such small particles were not able to be measured: “At the sub-23 nm scale, there are many liquid particles in the exhaust gas. These volatile droplets are not as dangerous to health as the solid particles. For an exact test result, we have to ensure that liquid particles are not detected by mistake during measurement. Using current measuring methods it is qualitatively not possible to remove the liquid particles without losing a large part of the solid particles. But we have succeeded in doing this through an optimized dilution system and the oxidation of hydrocarbons with the aid of a catalyst.”

Image via Graz University of Technology