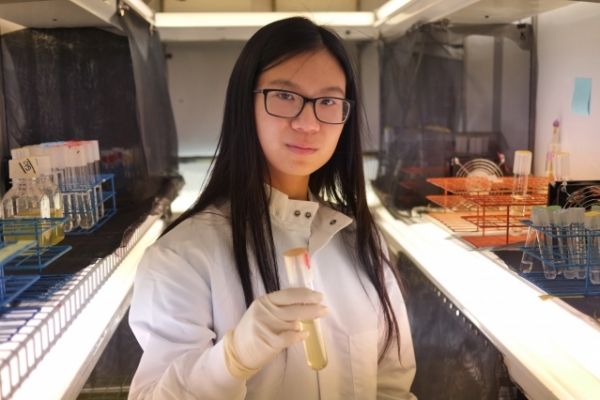 In 2010, the U.S. Army Corps of Engineers began restoring the Broad Meadows salt marsh in Quincy, Massachusetts. The marsh, which had grown over with invasive reeds and needed to be dredged, abutted the Broad Meadows Middle School, and its three-year transformation fascinated one inquisitive student. “I was always super curious about what sorts of things were going on there,” says Rachel Shen, who was in eighth grade when they finally finished the project. She’d spend hours watching birds in the marsh, and catching minnows by the beach.

In her bedroom at home, she kept an eye on four aquariums furnished with anubias, hornwort, guppy grass, amazon swords, and “too many snails.” Now, living in a dorm as a sophomore at MIT, she’s had to scale back to a single one-gallon tank. But as a Course 7 (Biology) major minoring in environmental and sustainability studies, she gets an even closer look at the natural world, seeing what most of us can’t: the impurities in our water, the matrices of plant cells, and the invisible processes that cycle nutrients in the oceans.

Shen’s love for nature has always been coupled with scientific inquiry. Growing up, she took part in Splash and Spark workshops for grade schoolers, taught by MIT students. “From a young age, I was always that kid catching bugs,” she says. In her junior year of high school, she landed the perfect summer internship through Boston University’s GROW program: studying ant brains at BU’s Traniello lab. Within a colony, ants with different morphological traits perform different jobs as workers, guards, and drones. To see how the brains of these castes might be wired differently, Shen dosed the ants with serotonin and dopamine and looked for differences in the ways the neurotransmitters altered the ants’ social behavior.

Photo: Biology major Rachel Shen sees what most of us can’t: the impurities in our water, the matrices of plant cells, and the invisible processes that cycle nutrients in the oceans.  CREDIT: Lucy Jakub