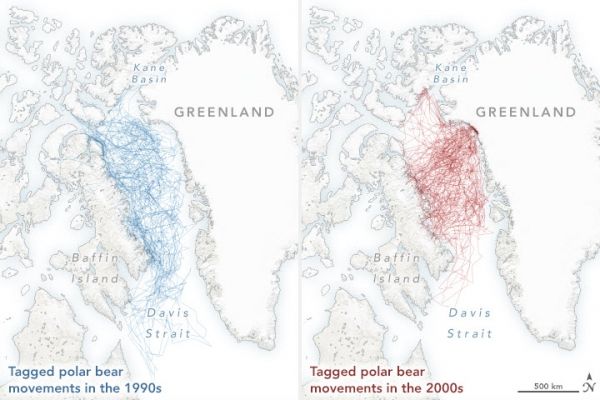 A new study shows that polar bears are spending less time on sea ice, leading them to fast longer, become thinner and have fewer cubs.

A polar bear’s life seems simple enough: eat seals, mate, and raise cubs. But a recent study shows some subpopulations of polar bears are struggling to complete these essential tasks because of declining concentrations of Arctic sea ice.

The Arctic sea ice cap is a large area of frozen seawater floating on top of the Arctic Ocean and its surrounding seas and straits. For polar bears, the sea ice is a crucial platform for life. They use the ice to travel long distances to new areas. They hunt for seals by finding their dens or sitting next to gaps in the ice, waiting for the unsuspecting prey to pop up. Sometimes, pregnant females dig in the sea ice to create maternity dens, where they give birth and take care of their cubs.

In recent decades though, this critical habitat has been shrinking. Sea ice concentrations have declined by 13 percent each decade since 1979 due to increasing global temperatures. Arctic regions have warmed twice as fast as the rest of the world, so seasonal sea ice is also forming later in the fall and breaking up earlier in the spring.

“We know that sea ice, which is where the bears need to be, is decreasing very rapidly,” said Kristin Laidre, an Arctic ecologist at the University of Washington. “When there’s no sea ice platform, the bears end up moving onto land with no or minimal access to food. Our research looked at how these changes affect their body condition and reproduction.”

In a new study published in Ecological Applications, Laidre and her colleagues described how declining sea ice concentrations are affecting the behavior, health, and reproductive success of polar bears.