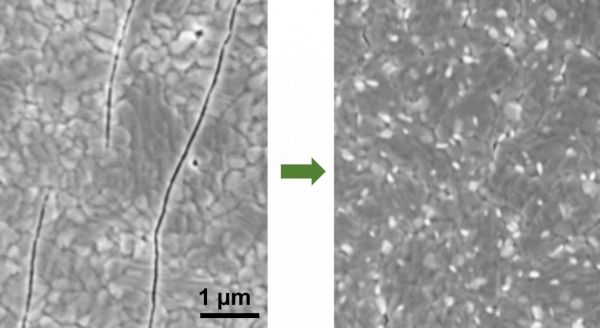 The study, published in the journal Acta Materialia, finds that though perovskite films tend to crack easily, those cracks are easily healed with some compression or a little bit of heat. That bodes well, the researchers say, for the use of inexpensive perovskites to replace or complement pricy silicon in solar cell technologies.

“The efficiency of perovskite solar cells has grown very quickly and now rivals silicon in laboratory cells,” said Nitin Padture, a professor in Brown’s School of Engineering and director of the Institute for Molecular and Nanoscale Innovation. “Everybody’s chasing high efficiency, which is important, but we also need to be thinking about things like long-term durability and mechanical reliability if we’re going to bring this solar cell technology to the market. That’s what this research was about.”

Perovskites, a broad class of crystalline materials, were first incorporated into solar cells in 2009. Those first perovskite solar cells had a power conversion efficiency of around 4%, but now that exceeds 25% — essentially the same as traditional silicon. The advantage of perovskite solar cells is that they can be made for a fraction of the cost of silicon, potentially cutting the cost of solar power installations. Perovskites can also be made into thin films that are semi-transparent and flexible, potentially clearing the way for energy-generating windows or for lightweight, flexible solar cells in tents or backpacks.

Image: A cracked perovskite film (left) can be fully healed (right) with some compression of a little heat. Credit: Padture Lab / Brown University