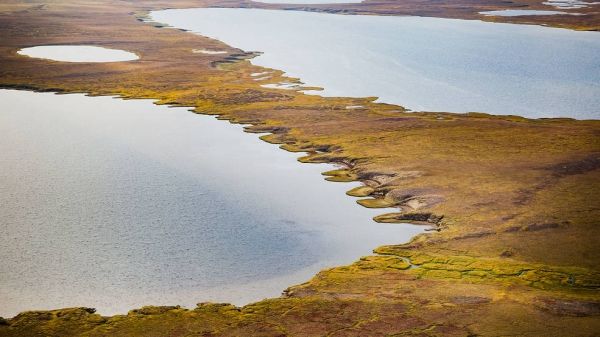 Scientists use planes equipped with special instrumentation to detect methane hotspots in areas where ground-based observations are difficult or impossible to measure.

The Arctic is one of the fastest warming places on the planet. As temperatures rise, the perpetually frozen layer of soil, called permafrost, begins to thaw, releasing methane and other greenhouse gases into the atmosphere. These methane emissions can accelerate future warming — but to understand to what extent, we need to know how much methane may be emitted, when and what environmental factors may influence its release.

That's a tricky feat. The Arctic spans thousands of miles, many of them inaccessible to humans. This inaccessibility has limited most ground-based observations to places with existing infrastructure — a mere fraction of the vast and varied Arctic terrain. Moreover, satellite observations are not detailed enough for scientists to identify key patterns and smaller-scale environmental influences on methane concentrations.

In a new study, scientists with NASA's Arctic Boreal Vulnerability Experiment (ABoVE), found a way to bridge that gap. In 2017, they used planes equipped with the Airborne Visible Infrared Imaging Spectrometer - Next Generation (AVIRIS - NG), a highly specialized instrument, to fly over some 20,000 square miles (30,000 square kilometers) of the Arctic landscape in the hope of detecting methane hotspots. The instrument did not disappoint.

"We consider hotspots to be areas showing an excess of 3,000 parts per million of methane between the airborne sensor and the ground," said lead author Clayton Elder of NASA's Jet Propulsion Laboratory in Pasadena, California. "And we detected 2 million of these hotspots over the land that we covered."